much ado about kanji

While I’d like to assume that most people know precisely what I’m on about, I guess I should throw in a morsel for those people not so interested in things Japanese: Kanji is the stuff you see on scrolls and painted in big black letters on banners – logographic Chinese characters used in the modern Japanese writing system.

Kanji is grammatically flexible – it can twist itself into nouns and adjective and verb stems – and personally I have a delight/despair affair with the beasties. It’s a bugger to remember the thousands of characters and their various pronunciations, let alone acquire the talent to reproduce the multitude of lines.

To make things trickier, a single kanji may be used to write one or more different words, and deciding which one depends on context, intended meaning, use in compounds, and/or sentence location.

While I’ve loved the simpler Japanese katakana lettering since I was a kid (when I first saw neon Tokyo signage through the eyes of Cubby Broccoli’s film crew in the Sean Connery-James Bond flick You Only Live Twice), I’ve had a more cautious, developing relationship with kanji that probably started with Akira Kurosawa’s Ran in my early 20s. 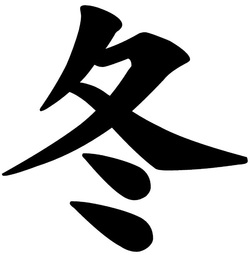 So the funny thing is that kanji, not katakana, made such a big impact on the novel – which is based in Melbourne, Australia, not Tokyo, Japan.

The first completed treatise of what’s now known as Tobacco-Stained Mountain Goat was cobbled together in 1992, while I was living in Richmond, an inner city suburb of Melbourne, and there was nothing Japanese about it whatsoever.

I wrote up a redux of the decade-old tome the following year – and thereafter again let it sit pretty, collecting dust, for the five years leading up to 2007. Then I did a major reboot, was accepted for publication through Another Sky Press in the U.S., and rewrites and editing took the better part of the next three years.

Somewhere along the line inserting kanji into the text became a big part.

As I mentioned, in 1992 there was none, not even mention of our protagonist Floyd's tattoo fuyu (‘winter’) – probably because I didn’t get it myself until 1994 in a particular winter of discontent; that’s something Floyd and I share, aside from drinks. 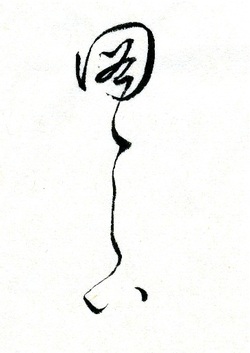 Likely the kanji settled itself in my brain 15 years later, after I’d watched in excess of a dozen Akira Kurosawa movies on the trot (all within one week) at the beginning of 2010.

While I do love Kurosawa and would readily volunteer myself to sit through this process another time round, there was a reason for my committed viewing: an article I was writing for Australian magazine Filmink to celebrate the centennial since the great man’s birth. In Kurosawa films there’s occasionally kanji that dominates the screen all by itself – accompanied by a sparse, minimal score by a composer like Fumio Hayasaka or Toru Takemitsu – and it's powerful stuff even if you can’t understand what the devil it says.

So in Tobacco-Stained Mountain Goat I decided to do a Kurosawa and throw in meaningful kanji, some of which isn’t even explained in the text – meaning that anyone who scoots through this piece will have a wee bit more insight than anyone having read the book.

Besides, I always dug full-back tattoos in cinema such as Robert de Niro's in Cape Fear, Russell Crowe’s in Romper Stomper, and Kanako Higuchi’s ink in the final Shintaro Katsu starring Zatoichi flick – which is why the novel’s femme fatale Laurel ended up endowed with her own cheeky version. Zuzushi is Japanese for ‘shameless’ or ‘impudent’, and is represented by the cursive, sosho-style kanji that Laurel has tattooed across her back.

The novel starts with the kanji characters that make up zetsubou hogging a whole page unto themselves. For me they truly do set the tone, as the novel begins bleak, on the verge of hopelessness, and zetsubou translates quite bluntly as in your face ‘despair’. On the last page, as well as on Laurel’s t-shirt in the preceding few paragraphs, there’s kibou – which means ‘hope’ – reflecting (I hope!) the notion that things will turn out for the best despite our hero’s travails.

And for the back cover I asked Scott Campbell, the cover artist, for a femme fatale goat with cat’s eye sunglasses, long gloves, and a cigarette trailing smoke that formed the zuzushi (remember the one that means ‘shameless/impudent’?). 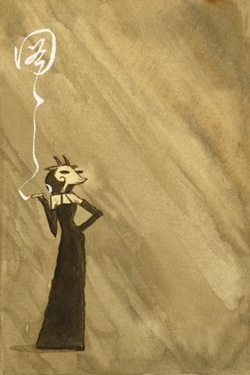 This is Laurel, after all, and her tattoo.

I’d previously commissioned Yasuko Sekine, a talented friend of mine here in Japan, to do the freestyle kanji calligraphy for the novel; Scott adapted that and my wayward concept into an absolute work of magic.

To be honest I’m still gob-smacked. Kanji never quite looked so cool.