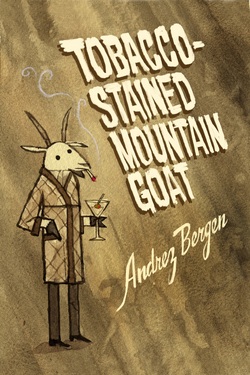 First published in paperback on 1st April 2011, Tobacco-Stained Mountain Goat is the debut novel from Andrez Bergen, an expat Australian writer/journalist ensconced in Tokyo since 2001.

And what's it about, in a very tightly-wound nutshell?

Think a sci-fi/noir/post-apocalyptic noir tome that sets Melbourne, Australia as the last city in the world—and is also heavily influenced by Japan, a country he's lived in for the past 10 years. On top of this the novel owes about 80% of its content to classic cinema rather than literature.

Published via Another Sky Press (USA).

Kindle and EPUB digital versions will available shortly. More info, a free preview PDF of the novel, and the cheapest place to purchase Tobacco-Stained Mountain Goat (at cost price, no less) is right here at the publishers Another Sky Press.

Alternatively you can pick it up online at Amazon UK and Amazon USA, and via more discerning and (we like to believe!) enlightened indie book stores.