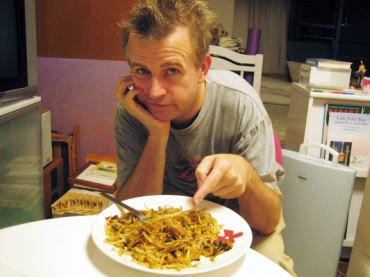 Entrenched in Tokyo for the past 10 years, expat Aussie Andrez Bergen says that he quite likes to steal furtive glances in a pseudo-metaphysical rear-vision mirror, greedily brushing up on the ‘found art’ chapter of the Dadaists’ handbook—along the way hacking together electronic/techno tunes as Little Nobody, Funk Gadget, DJ Fodder, Nana Mouskouri's Spactacles, Conversational Dentures, Atomic Autocrac, and a member of the LN Elektronisch Ensemble.
He's been remixed by people like James Ruskin, Shin Nishimura, Si Begg, DJ Wada, Dave Angel, Bas Mooy, AUX 88 and Patrick Pulsinger, and recently released his fourth album 'Hard Foiled'.

Originally from Melbourne, Bergen has also worked as a journalist over the past 17 years, for newspapers such as The Age in Australia and the Yomiuri Shimbun in Japan, and he's written for magazines as diverse as Mixmag, Geek Monthly, Impact and Anime Insider.
In 2005 Andrez married artist Yoko Umehara, and in November that year they had the world's cutest daughter, Cocoa.