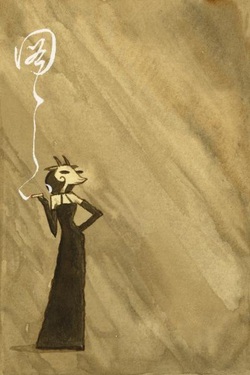 Bergen has cited the influence of Raymond Chandler on Tobacco-Stained Mountain Goat. "I adore The Big Sleep," he said in an interview for The Writer's Corner in January 2011. "Everything about the way it’s written, the descriptions, the wry quips... Chandler, that novel and the film version by Howard Hawks were a huge influence on T.S.M.G."

He also refers to a mix-media influence in the development of the the novel, in particular cinema and electronic music. "The novel has been sitting somewhere within my head space for the better part of 20 years, taking precedence on and off... but over the past four years it’s been at the forefront—and this has coincided with my resurgent interest in making electronic music. So some of the themes and ideas have obviously cross-pollinated: the movie sample/references and allusions; the underlying focus on a futurist take on the hard-boiled/noir detective concept."

In May 2011 he told website Me, My Shelf & I that "I'm not sure if it's anything to brag about, but Tobacco-Stained Mountain Goat has taken half my life to complete... what the novel does do is try to hang onto a sense of cheekiness amidst the drama, quirky red herrings that reference my love of geek culture and cinema—but do add something to the story—and a sense of historical revisionism that's shaped the past 23 years of my life."